Becoming an artist was inescapable for Minnesota native Adrienne Reynolds who says “Once you start it becomes part of you. I don’t think I could not make art, no matter what else I might do in life.” Reynolds received her master’s in Fine Arts from Parsons the New School for Design developing her skills in both 2-D and 3-D art, discovering that the two correspond well with one another in her work. She says “Lots of people have said my drawings look like sculptures and vice-versa.” This organic movement from drawing to sculpture, as well as the natural progression that flows between her pieces is what sets her apart as an artist.

From constantly traveling from New York to Canada, movement and energy has become a factor to her intuitive process in her art. Her “Paper Cuts” series is inspired by her drawings except here she breaks the elements down into basic shapes. She explains “I wanted to see what would happen if I extracted some of the most basic components (squares, rectangles, lines) and created compositions …. What could I evoke by layering paper on paper?” Compositionally the paper cuts evoke this dynamism that come alive in the arrangement and layers. Reynolds says she works “spontaneously and organically. I know that I’m influenced by my physical environment, moving through cities, and traveling … in my drawings and paintings I like to allow things to emerge as much as possible.” The process is just as important as the finished piece; she says “It’s through this making process that certain themes have emerged, which in turn influences the next work.” 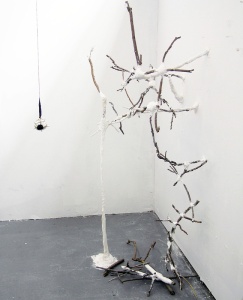 Extending her fascination of movement and emergence into her explosive looking drawings that fits in to a well balanced and engaging result. The word “Tensile” was used to describe these drawings which are how she came up with her “Collisions in a Tensile City” series, displaying her interest in “how things come together or fall apart; in structures that support us and their fissures.” It is this push and pull of together and apart, support and collision that energize these pieces that is also seen in her “Tree Sculpture”. She says “In a similar way to the drawings it’s very much a representation of energy and movement and points of connection.” For Reynolds this installation puts on display the decision making part of creating art. She says “each juncture represents a choice to be made, which way to turn, where to go from here? For more information about Adrienne Reynolds and her work Adrienne Reynolds Website